A STITCH IN TIME SAVES N I N E

Now that the dust has settled, and the NDC destabilizers are comfortably resting within the house, and are enjoying the benefits of a partisan NNP organization, the time is now overdue when the NDC should lick its wounds, take a deep breath and recognize and respond appropriately to what is now the Grenadian political reality.

After being in office for over 30 years and prime minister for half that time – Grenada under the so called “leadership” of Dr. Mitchell has reached the point where his organization in my view – has exhausted its governance potential with his visionless submissions, and can offer nothing more to enhance the “fortunes” of our country.

Dr. Mitchell’s answer to Grenada’s acute economic, social and political challenges – is not reconstructing the dying agricultural and marine sectors together with the revival of the rural economy, to avoid wide spread destitution, but in building a hotel on a beach with funds obtained from selling Grenadian passports to white foreign CBI developers, who would be voting for the NNP in the next general election. This ”initiative” is undertaken to provide a few low paying jobs to Grenadians, after ravaging the environment – St. Patrick’s Break Water Project included, where residences in the Mt. Rodney and surrounding areas have lost their homes, their property and their livelihood by the current invasion of the sea, the same apply to the residences of Molineere with the collapse of that critical part of the Western main road due to the NNP persistent arrogance and incompetence, and without any compensation from the government to the destitute victims.

In some cases when proposed projects fail to materialize, as obtained on two occasions with the St. Marks Poultry farm projects, and on another occasion – also in St. Marks with the Acqua Fish Farm project, the foreign CBI speculators/ developers disappear with passport funds which are guaranteed by the NNP government; thus hemorrhaging indirectly the poor tax payer’s meagre means, as the poor becomes poorer and the rich becomes richer – (Black neocolonialism in action – very much in the image of Frantz Fanon’s “Black Skin WHITE MASKS”), followed by no investigation or accountability (rabid corruption).

In a society where teachers, public servants and other government employees have to fight “tooth and nail” with the government for what is their due entitlements – including pensions and gratuity, and where another Cabinet Secretary – having been dismissed for some time now – since 2018 by the prime minister after his election victory, for no other reason but having no confidence in her, and has refused to pay her what our constitution provides, even with the Supreme Court upholding her cause, shows that our future under the NNP is looking DIM, as there appears to be an NNP CONSPIRACY to pauperize into beggar status the Grenadian working class by dismantling the Trade Unions.

The above scenario is beginning to take effect by the current refusal to pay the 4% increment now due to the teachers and public servants since January 2021, while the cost of living is daily spirally upwards, and the NNP priorities in meeting its constitutional and legal commitments are politically driven, and not in the national interest, in order to hold unto State power at any cost. BREAKING NEWS: Consider the trauma that is taking place with the former local RBTT workers, the bank’s clientele and the union with the new ACB Caribbean employer, under the watch of the Minister of Labour in permitting Antiguan tellers into Grenada to take the place of local long serving employees.

Grenada is experiencing the beginning of a distasteful dictatorship, which must be nipped in the bud. This is where the NDC as the official opposition, with a history of equity and impartial governance should close the breach in the cause of WE THE PEOPLE.

The time is ripe for a change for the better, and there is no other organization that is more capable at this time for the rescue mission than the official opposition, as witnessed in the recent La Sagesse and Sauteurs Break Water projects demonstrations, but that is just the tip of the iceburg, the real challenge is the urgent rectification of the electoral process as provided in our constitution and highlighted in the OAS and CARICOM reports after the last two elections – with special attention in padding the voters list with CBI Grenadians, and expounded in great detail in J.K. Roberts policy paper of March 22nd 2021 titled “How Pathetic of Grenada’s opposition NDC about the Election Office”, not forgetting the hijacking of our democratic institutions like the Public Service Commission and the recent attempt to privatize the GCNA and Cocoa Associations for the benefit of NNP political actors.

This therefore is a clarion call for the NDC under new and robust leadership, to join with WE THE PEOPLE to come to the rescue of our country before it is too late – from the evil of a black neo-colonial government; and to initiate with urgency – the Passing Parade in order to usher in, a new dispensation which empowers our people in an equitable, just and prosperous society. 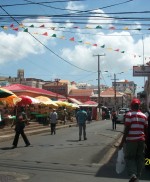