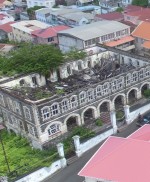 It was Reporter  Euginia Peters of GBN who broke the news to President Tim Byam of the Willie Redhead Foundation via telephone during the morning of Tuesday, November12, 2019, that the Ministry  of Works was cleaning the debris in York House – 15 years after the damage caused by Hurricane Ivan on September 7, 2004.

The “good news”  were confirmed during the evening newscast on GBN that said evening, and the skeletal walls of the building which require immediate stabilization could be clearly seen without the huge tree which had been growing from the “bowels” of the structure over the years.

For those who are concerned/interested in our history, culture and the built heritage of Grenada, Carriacou and Petite Martinique, (you) would recall the admonition over the years of the Foundation to the powers that-be for the cleaning and eventual restoration of this architectural gem on Church Street in our Capital City of St. George.  A city internationally recognised for its Georgian architectural heritage and its unique  urban formation.

BRIEF HISTORY    (Extract from Dr. Trevor Holmes –“ York House Conservation Project”)   “York House was originally built as the Depontieu’s residence in the 1780’s when this building was the most prominent civil building in the town of St. George, if not the island.  The front elevation (façade) was changed in 1786 and the entire building remodeled from 1802 – 1807 after it was bought in 1801, as the new House of Legislature.

“York House was therefore originally built shortly after the disastrous fires in St. George’s in 1771 and 1775 when the whole town was rebuilt with yellow bricks and fish scale red clay tile roof.  The materials are said to have been brought from Europe as ballast in ships used to transport sugar, spices and other Grenadian produce”.

“York House was built with those two materials, but also made use of the local volcanic grey stone.  York House was named after the Duke of York who visited Grenada in the eighteen century.

”As a house the building would have been built around the time of possession of Grenada by the French in 1779 and a return to British rule in 1783 following the treaty of Versailles shortly before the time of the French Revolution (1789 -99).

“As the House of Legislature, York House witnessed the abolition of slavery in 1834, and came into further prominence in 1877 when the island was pronounced a Crown Colony”.

York House, until Hurricane Ivan in 2004 had the Houses of Parliament on the top floor, where visitors were welcome when Parliament was in session.  The Supreme Court occupied the lower floor.  Because of the status of the Deponthieu family and the importance and prominence of the building the street immediately to the West was named after its original owner as Deponthieu Street.

The recent public pronouncement by the Parliamentary Representative for the Town of St. George – Hon. Peter David, that during the early months of 2020 the repairs to the Public Library would commence, after a closure of over eight (8) years, could be a positive omen, that at last the aesthetics of the built heritage of our Capital City is worthy of serious consideration in the equation of  NATIONAL DEVELOPMENT  and the enhancement of our TOURISM PRODUCT.

The  Willie Redhead Foundation therefore takes this opportunity to commend the Ministry of Works and by extension the Government of Grenada for this initiative, and trust that the cleaning of York House is the beginning of the restoration of this national treasure and the start of an upgrading of our Capital City based on a project concept requested by the minister and presented by TWRF  to him on August1st 2019;  which  could be the catalyst/ beginning of a national Physical development and economic upsurge for PURE GRENADA.

Photo   of   YORK  HOUSE  after its 1st cleaning