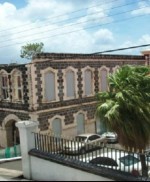 In an effort to safeguard our institutions, the Willie Redhead Foundation (tWRF) is constrained to join forces with other likeminded organisations in solidarity with the Grenada Bar Association (GBA), as it endeavours to cope with a judicial system that is in shambles and is in urgent need to have it holistically rectified in the immediate future, in the interest of providing JUSTICE to the Grenadian public, notwithstanding the intellectual dishonesty by those who postulate that the Privy Council has never assisted in this regard, whereas a YES Vote for the CCJ in the Nov. 2018 referendum, would have made a difference; as if these bodies are financial institutions established to provide funding to governments who refuse to honour their national obligations.

Listening to Ms. Lisa Taylor – president of GBA on the January 14, 2019 Beyond the Headlines (GBN) programme, and considering the existing hard evidence, one is convinced that the 3rd arm of the State-Governance-Structure – the judiciary, has continuously been neglected, almost abandoned by succeeding governments, that it no longer function, and in fact has become a denier of justice to those who most require it, that is the poor, the vulnerable, the uneducated (disadvantaged) and the politically unconnected in our diminishing democracy.

The current state of the existing CRISIS is a reflection of our mentality. As the lawyers gathered on January 7, 2019 in the court yard (car park) of the Registry on Church Street – there, to the immediate South is the decaying York House, the location of our former parliament and high court of Grenada, which was in constant demand; and would have continued to be so, had it been repaired soon after Hurricane Ivan in 2004, as recommended by the CDB and other international organisations, when repairs would have been a fraction of what it would cost today, in 2019.

Fourteen, going on 15 years after the damaged caused by the hurricane, no government has seen it fit to repair (restore) this outstanding architectural gem in the heart of our capital city as an example of preserving PURE GRENADA. Instead, a $23.0 million new parliament building, which does not include the cost of landscaping – has been constructed, serving in our view a limited purpose, which does not reflect (mirror) or symbolise in its design, tropical historic Georgian (Grenadian) architectural features for which St. George’s is well regarded both regionally and internationally.

The current news in circulation is that this building (York House), together with the Museum Complex, the GG’s residence, the Public Library and the 3 storey Barracks on Melville St. with the slave holding bay (basement) among other historic structures would be/have been “acquired” by a foreign government under a “Build, Operate, Lease, Transfer” (BOLT) project arrangement. If this is not FAKE NEWS, it is hoped that what will be done in the name of the Grenadian people would be to our advantage and not the usual sell out to foreign interest, as we gamble with our sovereignty.

For the record, the public is reminded that tWRF has since 2004, made overtures to every parliamentary representative for the town of St. George to have York House restored (repaired), to no avail. Let’s hope that a positive outcome is in the making under the new dispensation. This perhaps might make a difference to the current judicial crisis, and that justice delayed would no longer be justice denied in this our 45th year of “political” independence.

The passing of an INTERNATIONAL MEDIA ICON