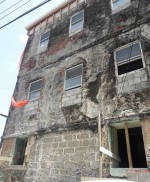 – When the town of St. George’s was designed and built by the French in the early 1700’s, it was made  manifest in the image of the then colonial occupier (of the island). Later when the British took control  they superimposed their image on the former in so far as we have (today) a capital city that was well  known regionally and to some extent internationally as a Georgian city– some say, the prettiest in the Caribbean.

– In 1974 Grenada achieved its “political independence”, and our post independence politicians took full control of the affairs of the State. The functioning administrative, educational, social  and physical planning systems left by the British began to be tinkered with.  Standards have been replaced with mediocracy and the result is what we have today – a  chaotic city, bursting at its seams with too many vehicles, no place to park with litter and side walk vending; while pedestrians have to take their lives in their hands, as they dodge among moving traffic to commute from point a to b. Is this the image of an independent country?

– The focus of this article is to put the spotlight on the physical planning aspect (the built environment) of our development. The revised Physical Planning Act of 2016 gives the minister, acting through his agents – the Physical Planning Unit, enormous powers to demolish buildings which do not comply with the act. This was made public when the Senior Planning Officer and his deputy held consultations recently with building contractors both in Grenada and Carriacou.

– What this, and previous Acts does not address, is the recognition of our historic built heritage and how to protect it, as an important component of our patrimony, a significant part of our tourism industry and the economic benefits that can be derived from a cadre of trained historic technicians in the restoration of historic structures as a specialised sector in the construction industry.

– In other words a recognition of  the aesthetics which have made St. George’s in the past the envy of its regional neighbours. If this element of our building industry remain unrecognised and    unimplemented, St. George’s would become in the not too distant future, just another 3rd world galvanise and blockwork town with no aesthetic appeal, notwithstanding the contemplated climate  resilience initiative.

– To support this argument the Sentinel brings to the attention of the Physical Planning Unit – a heritage building on Young Street that is undergoing repairs/restoration. This building known  as EDINBURCH HOUSE is part of the St. George’s HISTORIC QUARTER, and has remained unoccupied for several decades, as the original owner(s) migrated to Australia about 4-5 decades ago.

The new owner who received planning permission about 2 years ago to convert the residence into a hotel – was given, it would appear, full reign to do as he pleases. Instead of replacing the original Georgian sash windows he has partly filled in the original opening and puts in its place a two piece truncated sliding window which is completely incongruous to the historic design.

It is understood that the new hotel in the centre of St. George’s would have no car park, and the new roof design will not replicate the original hipped roof which is hurricane resistant with clay tiles finish. So the question is asked:  Physical Planning Unit – what is your VISION for Urban St. George in the 2nd decade of the 21st century and beyond, is this the “subjective image” of PURE GRENADA?