“A county that does not appreciate and protect its natural and cultural heritage is not deserving of
nationhood” – Dr. Keith Rowley Prime Minister of Trinidad & Tobago.  (words to that effect).

It would have been music to the ear if those words were uttered by our political directorate, but as fate would have it, we are not so blessed.

For the past 23 years the mantra of the Willie Redhead Foundation has been: “the protection and enhancement of our natural and cultural heritage”. This proclaimed objective became our watchword and initiative, not for the sake of propaganda or self aggrandizement, but because there was and still is, more so today than ever – as the need is now most apparent, in strengthening our (heritage) tourism product, which the economist say is about 25% of our Gross Domestic Product (GDP), and is therefore one of the main pillars of our economy in providing jobs, not to mention its intrinsic value in reinforcing our national identity.

All the regional organizations: CARIMOS, ICOMOS, CDB and more recently CARICOM – through its cultural manager, have been emphasizing “the need to capitalize, on the existing local and indigenous built heritage which is an invaluable resource in national development”. Such local resource for example could include the fortifications of Grenada, Grenada vernacular architecture, rum distilleries, great houses, Janet houses, slave pens, village and rural historic formations, such as the kalinago village at La Poterie, St. Andrews and boat building in Carriacou and Petite Martinique (echoes of “Vanishing Sails”).

All of these and more, could comprise a Community Tourism Sector, which could ignite the moribund rural economy,as opposed to imitating and mimicing the same glitzy multistorey facilities in concrete and glass as obtained in 1st world countries; which are without appeal to our visitors from these destinations, who are eagerly expecting to savour an authentic local experience other than sand, sea and “Soca”.

According to Dr. Hilary Brown, Manager of CARICOM Cultural and Community Development , “… in spite of the tremendous rich tangable cultural heritage of the Region, only six CARICOM Member States have sites on the World Heritage list, which includes Belize, St. Kitts and Nevis, Suriname, St. Lucia and Haiti”. Since the publication of this list, Jamaica and Barbados now have nominations on the World Heritage list.

Grenada has been making offical and media pronouncements over the years, in trying to put together a proposal for nomination of a site(s) to UNESCO. The lack of success in this regard, is manifested in the absence of a genuine and sustained commitment on the part of Government, despite signing international conventions; as the Ministry of Culture does not have a cultural policy and supporting legislation in place to move the process forward for the benefit of all Grenadians, in order to put our county on the world heritage stage, with its attendant economic benefits, global prestige, and clout in international cultural affairs.

That said, there is the occasional ad hoc attempts, such as the current MUSEUM BILL, which seeks to “acquire” the facility that has been operating for the past 40 years by patriotic Grenadians, without any assistance from government. The question is, who advises government, which boasts of “participatory democracy” – on making these erratic decisions, without even acquainting or seeking “guidance” from the persons who so successfully operate this important national (public) facility over the years?

Before closing, attention muct be drawn to the recent removal of the ornate cast iron balcony of a major Gerogian heritage building at the corner of Granby and Halifax streets in the core of down-town St. George’s. this building has been occupied for many years by George F. Huggins’ Farm & Garden outlet.

HERITAGE MONTH 2017 like the previous years (2015 & 16), would be marked by the usual platitudes including statements in the print media and with radio and TV presentations. Nothing of significance will be accomplied, as Heritage and Culture are not part of our politico/ economic DNA.

The final paragraph in the 2016 SENTINEL article – entitled “HERITAGE MONTH – April 2016”, is worthy of repeating: “Until the Government of Grenada (any government) recognises the importance of our natural and cultural heritage as an important and essential component of our national development, as is routinely done in the developed economies of the world. We would be forever celebrating an illusion, unattainable without the necessary policies and legislation to make the preservation,  protection and enhancement of our natural and cultural heritage a living reality. In the meanwhile we will continue to witness the disappearance, especially of our built heritage – York House, the Public Library, Fort George and Government House come to mind, while Camerhogne Park, our premier recreational site on Grand Anse beach is under the auctioneer’s hammer (gavel) for the highest bidder – in a  manner of speaking.”

Since the publication of the 2016 Heritage article, the BLUE ECONOMY initiative has taken centre stage, with the threat of another GREEN PUBLIC SPACE, namely Quarantine Point, being taken away from us. As the saying goes: Eternal Vigilance is the price for democracy.

YORK HOUSE – a depressing spectacle in the heart of our Capital City. 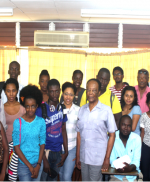 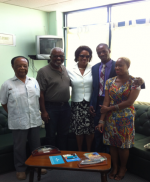