In order to assist in identifying  some of the buildings, tWRF submits hereunder a list – as a prologue to the repairs and restoration initiative recently announced by the government.

The safety of the public can be described as endangered when the physical (natural), and manmade environment have eroded or deteriorated to such an extent, when it can negatively impact the human person(s) who live or perform their daily occupation within the affected area(s), resulting in serious accidents or even loss of lives. The abandoned building situation can also negatively contribute to the state of the nation’s health which provides breeding sites for the deadly ZIKA and other mosquito borne diseases.

1 – The rock face in front of the north entrance to the Sendal Tunnel in St George’s – recently stabilized.

Both of these are examples from the physical (natural) environment.

3 – The emphasis however is on the Safety of buildings and civil infrastructure in the towns of Grenada especially in St. George’s. Buildings which can be described as derelict, abandoned and or lack of (proper) maintenance resulting in structural deterioration and eventual physical collapse, are so catergorised.

Outstanding examples in the Town of St. George are:

Another area of PUBLIC SAFETY are the broken concrete sidewalks, broken concrete drain covers and pot holes in the roads, causing injury to the feet and other bodily harm.

PUBLIC SAFETY can be extended to include pavement and sidewalk vending, which makes it necessary for pedestrians to walk on the narrow roads dodging moving vehicles and becoming targets for road accidents, which could be fatal.

WHERE IS THE MINISTER FOR CULTURE & HERITAGE and the PARLIMENTARY REPRESENTATIVE for the Town of St. George in all of the above. The absence of LOCAL GOVERNMENT is a serious contributory factor in the declining scenario describe, which began at post independence in 1974. 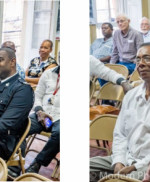